Whitman Middle School is proud to announce that on Saturday, April 23rd, 2022, our own Zoe Limberg was named the Virginia History Day Champion in the Junior Exhibit category for the National History Day project.  Zoe’s project, “Bootlegging, Beer, & Booze: The Great American Experiment,” will advance to the national competition where she will compete with nearly 3,000 students from all fifty United States, Washington, D.C., Guam, American Samoa, Puerto Rico, the Northern Mariana Islands, and international schools in China, Korea, and South Asia.

Whitman Middle School students have been competing in the National History Day competition for 18 years under the leadership of 7th-Grade History teacher Melissa Chesney and the 7th-Grade History and English departments.  National History Day is a year-long academic program focused on historical research, interpretation, and creative expression for 6th- to 12th-grade students. This year, our school competition consisted of 133 projects including exhibits, websites, documentaries, research papers, and dramatic performances. Zoe’s project was the top project at Whitman and was chosen to advance to the Virginia Region 5 competition.

“Teaching the National History Day (NHD) project was very challenging this year,” according to Chesney. “Students were returning from a pandemic learning environment and there were many setbacks with scheduling that required significantly more independent work on the students’ part. Zoe Limberg not only met this challenge but exceeded it.” Chesney, along with English teacher Kathleen Brado, supported Zoe through the production of her project throughout the school year.

Zoe went on to compete at the regional competition that took place at West Springfield High School in Springfield, VA on Saturday, March 5, 2022. After placing second at the regional level, Zoe incorporated the feedback she received from the judges and used it to improve her project. “I liked the judges' feedback,” Zoe reported.  “It was good to know what I could improve on since this was my first time doing the project.”  This refining process ultimately resulted in a first-place finish at the State competition in Richmond, VA. She will represent the state of Virginia at the national contest, being held virtually the week of June 12- 18, 2022. Zoe is both excited and nervous about the national competition.  “At first, I just wanted a good grade.  Now, I think it would be cool to win.” Congratulations and good luck to Zoe! 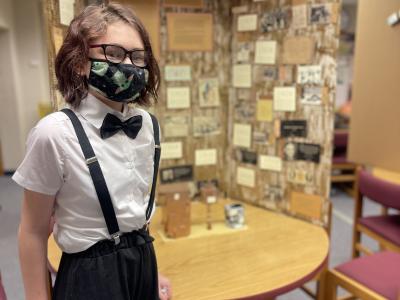 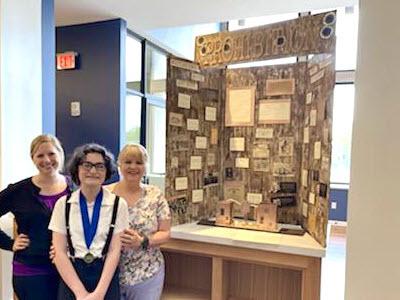 Zoe and her teachers, Kathleen Brado and Melissa Chesney, at the Virginia History Day competition.

Zoe and her teachers, Kathleen Brado and Melissa Chesney, at the Virginia History Day competition. 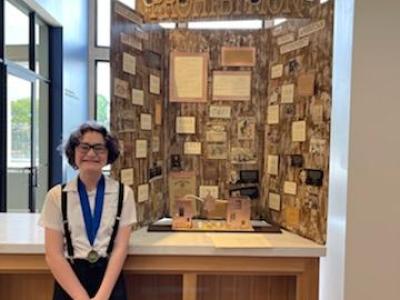 Zoe and her championship exhibit at the Virginia Museum of History and Culture.

Zoe and her championship exhibit at the Virginia Museum of History and Culture.